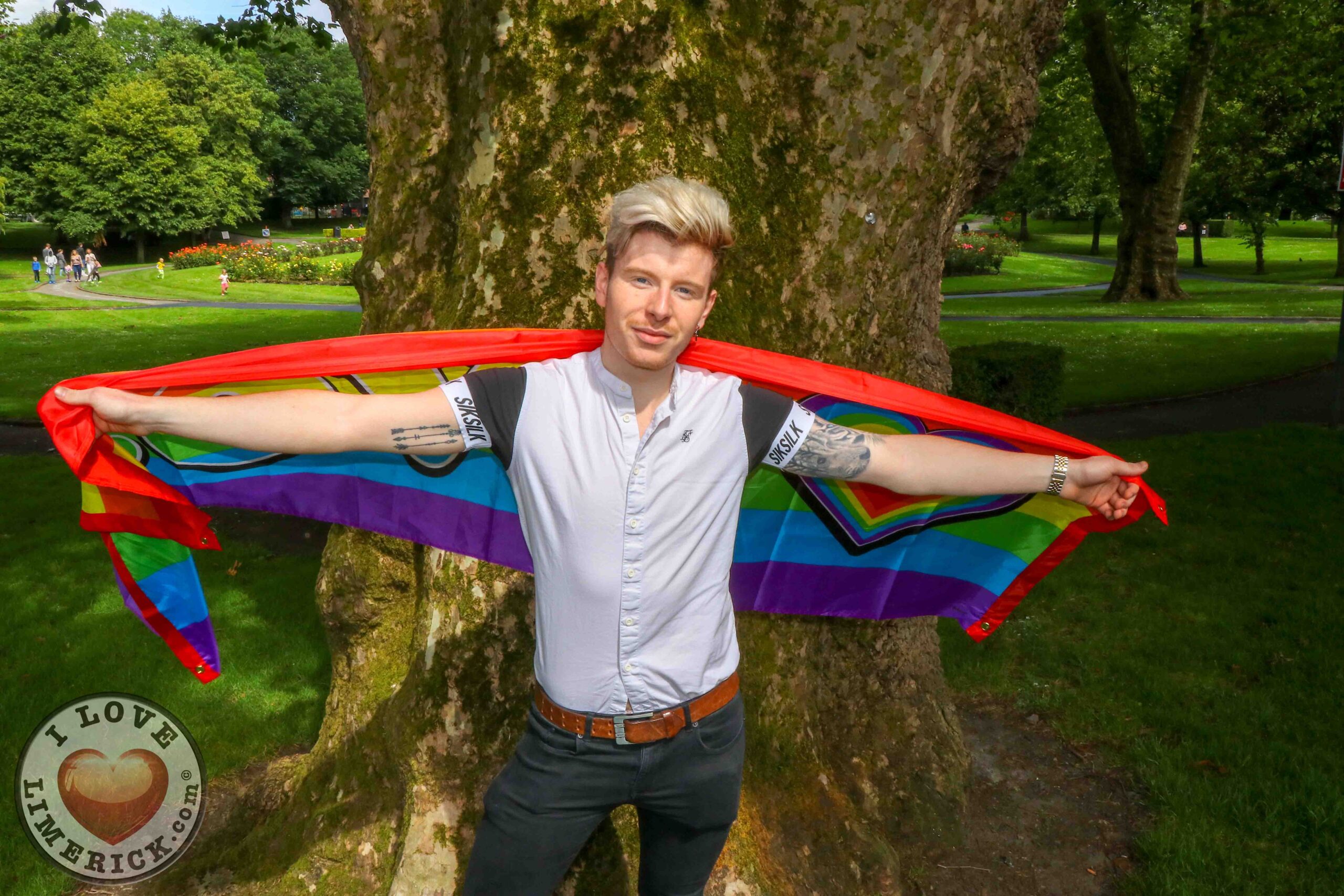 Limerick Virtual Pride 2020 takes place from July 6 -12, with a virtual Parade on Saturday, July 11 at 2.30pm live from the Limerick Pride Facebook page. This year’s Virtual Pride offers something for everyone!

Lisa Daly, Chairperson of Limerick Pride said, “We are thrilled to be still able to bring some Pride into people’s homes during this time to offer a fantastic line up for this year’s festival. Special thanks to all our great community, without your support and teaming up together Limerick Pride 2020 would not have been possible, we are extremely grateful and proud of each one of you, so thank you. This year we chose the theme ‘Support Each Other’ with our hashtag #SpiritOfPride because now more than ever before we should be joining as a community and supporting each other.” 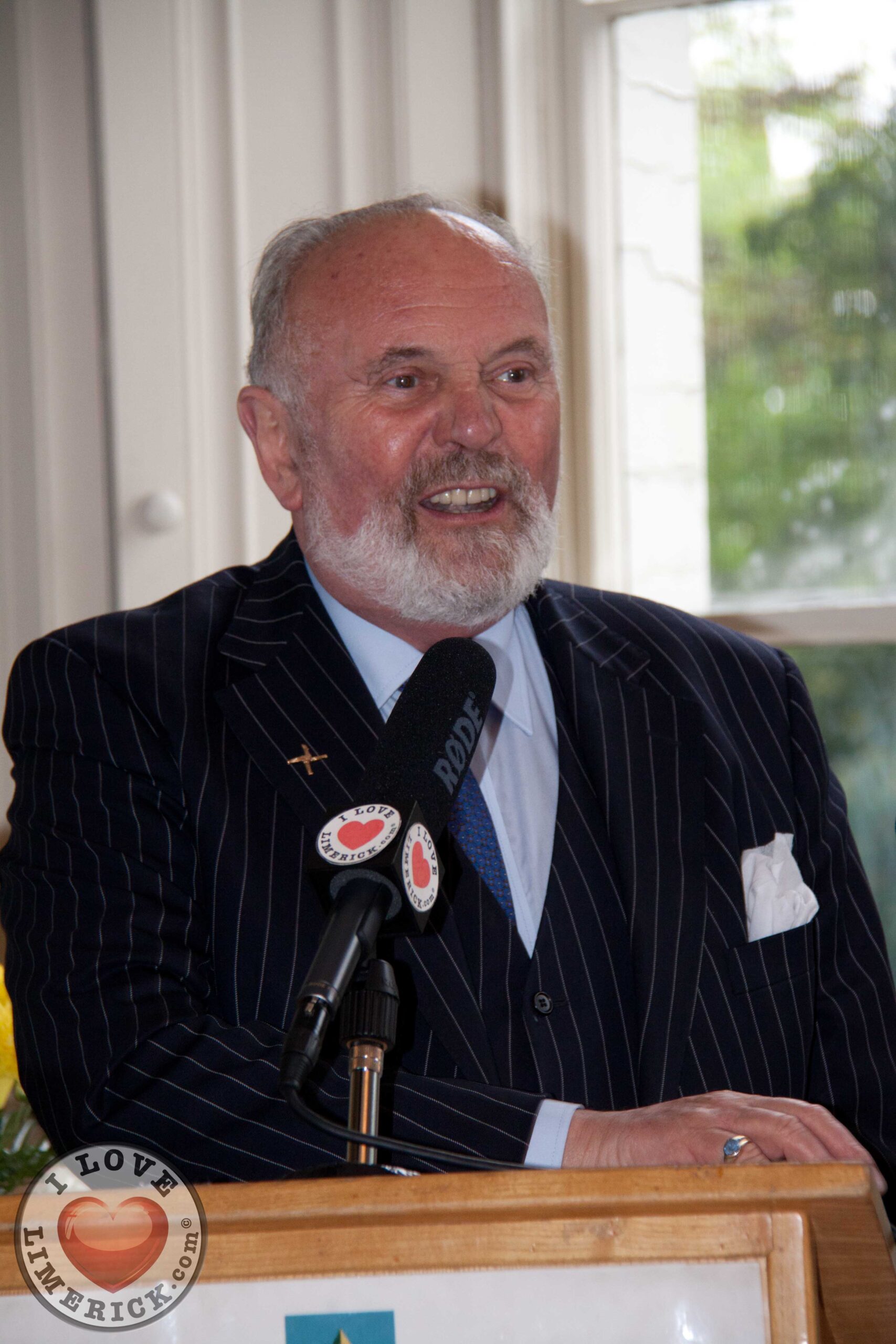 Richard Lynch, PRO of Limerick Pride said, “We are delighted to announce that this year’s Grand Marshall is one other than Senator David Norris, is an Irish scholar, independent Senator and civil rights activist. Internationally, David is credited with having, “managed, almost single-handedly, to overthrow the anti-homosexuality law which brought about the downfall of Oscar Wilde”, a feat he achieved in 1988 after a fourteen-year campaign. He has also been credited with being “almost single-handedly responsible for rehabilitating James Joyce in once disapproving Irish eyes”. He was the first openly gay person to be elected to public office in Ireland. We own him so much and we are thrilled that he is our Grand Marshall for this years Virtual Pride!”

Lorcan McAuliffe, a mental health worker and a proud Limerick man who was crowned Mr Gay Ireland 2020 said, “2020 has put many unprecedented challenges before us. Covid-19 has taught us the importance of family, friends, the love we share and supporting each other. Although this year we won’t walk shoulder to shoulder proudly celebrating the love and pride our community holds so dear to our hearts, we are still all in this together! The virtual pride approach many have taken this year ensures that although we are not side by side that we can still celebrate our pride as a community and feel more connected than ever!”

With a physical Limerick Pride Festival not being able to take place, Limerick Pride are holding a  Limerick Virtual Pride to bring Pride into your homes and to reach those who may not have ever seen or experienced a Pride event or a Pride parade before. Lisa added, “We wanted to reach the wider and rural communities so that even if we cannot dance together in the streets, from the safety of our homes, we will be able to celebrate all that makes our community so beautiful, so resilient, and so rich with diversity. We would also like to encourage everyone including businesses to display a rainbow flag or change their business lighting into the colours of the rainbow to mark Limerick Pride this year.”

Events include a Glam Pride Inspired Make Up tutorial with local Make Up academy Jimmy C, ‘Then And Now’, an evening of stories, songs and performances featuring Limerick queer artists hosted by theatre artist and musician, Ann Blake and her wife Jenny, a Virtual Cabaret Bingo and a Limerick Youth Service Make Up Tutorial.

Mickey Martins returns for another year to host the pre-pride party, ‘Twas the Night Before Pride” secret session on Friday, July 10 which will be broadcast live on the Mickey Martins Facebook page.

On Saturday, July 11 from 2.30pm, a Limerick Virtual Pride Parade will stream on the Pride Facebook page followed by the traditional Pridefest featuring performances from many local artists, drag queens and the annual Tea Dance with Myles Breen.

This year Limerick Pride have teamed up with local Make Up academy Jimmy C to bring you Glam Pride Inspired makeup tutorial.

This is an Online Event which can be viewed live on the Limerick Pride Facebook page.

Jimmy C Makeup was first established in 2015 offering the highest quality in Makeup Training. Jimmy C is now renowned for the Jimmy C College Of Makeup Artistry where they offer the very best Makeup Training for all levels.

Join Theatre Artist and Musician, Ann Blake and her wife Jenny, a political activist, as they host Then And Now: an evening of stories, songs and performances featuring Limerick queer artists. Reflecting on the theme of being out at different ages in different times, the artists will share a combination of their own work and/or work which inspires them. Artists on the night include Myles Breen, Michelle Fox, Shane Hickey O’Mara, Jared Nadin and more to be confirmed.

Ann wrote her award winning show, The Morning After The Life Before, in 2017 and has since toured it in Ireland, The UK, Canada and New York and Jenny was a key figure in ‘Yes Equality Limerick’, the Marriage Equality campaign in 2015.

The Youth Zoom event which will include chats and musical numbers.

Join your hosts Dame Stuffy and Carrie Dewayy as we bring you Virtual Cabaret Bingo. This will be bingo like you have not experienced before so get ready for a night of comedy, entertainment, and performances. Prizes up for grabs on the night, including cash prizes so the more people that take part the more money you have a chance of winning. To play only costs €5 for 2 Bingo Sheets which will be emailed to you. Full list of rules and Paypal link can be found on the Limerick Pride Facebook event page. This is a night not to be missed, we would highly recommend you and family or friends to join in on the fun. Remember the more people in it the higher the cash prize will be. 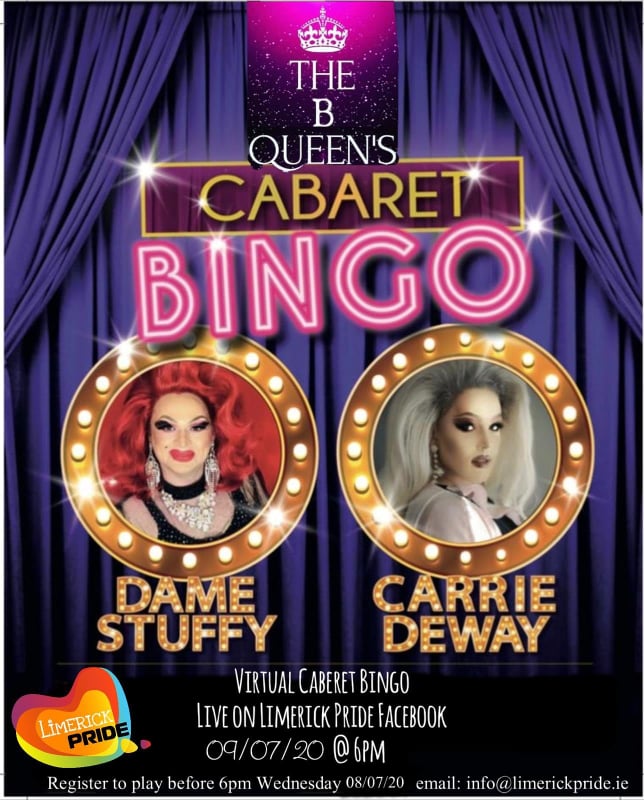 Limerick Youth Service, Make Up Tutorial with drag queen and king followed by a movie night over zoom with young people There will also be a competition with a Prom King/Queen and Monarch for non-binary.

‘Twas the night before Pride’ secret session from 9pm

Mickey Martins returns for another year to host the pre-pride party, Twas the night before pride secret session. Mickey Martins will have the guest DJ. THIS IS LIVE ON MICKEY MARTINS FACEBOOK PAGE AND NOT AT THE ACTUAL PUB.

Limerick Virtual Pride Parade will be shown out on Pride Facebook page, where we will show a mix of our Parades, messages, and pictures from the public. This year’s Grand Marshall is Senator David Norris.

The virtual Limerick Pride Parade will also feature as the opening pride event for Pride Inside. Pride Inside includes Kerry Pride, Killarney Pride, Galway Pride, Black Pride Ireland and Mayo Pride which have for the first time all joined together to bring events across Ireland from July 11th-19th .

Join Pride for the traditional Pridefest (Block Party) where there will be performances from many local artists, drag queens, Live music from Irelands Got Talent Cork girl duo Sparkle and more.

A Cup Of Tea With Tina D at 6pm

Please note: All youth events registered through Eventbrite will receive a package, no youth events during the week will be shown out on any of Limerick Prides social media pages. Follow