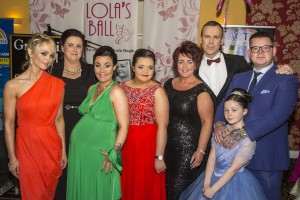 Lolas Ball, an evening to remember Lola Jane Nagle took place this past Saturday in the Greenhills Hotel in aid of ACT for Meningitis. Richard Lynch of I Love Limerick was honoured to host the event with his good friend Leanne Moore and the night was very emotional, filled with love and a huge success!

On April 15 last year one family’s whole world was turned upside down when they tragically and suddenly lost their precious little girl Lola, aged just 17 months, to meningitis.  Nothing could have prepared them for the devastation that losing a child would cause. Since then the family have worked tirelessly to prevent another family from going through their nightmare. Lola’s family wants to ensure that no one faces the meningitis journey alone.

Last June, an unbelievable crowd gathered today the AllStar Ink tattoo parlour, in Limerick City, for a Lola Nagle ACT for Meningitis Fundraiser. €19,924.28 was raised after a number of people donated money, or paid to get butterfly tattoos, in aid of the ACT for Meningitis organisation.

“We never thought meningitis would affect us but it did,” says event organiser and Lolas sister, the inspirational 17 year old Leah Melling.  “We organised this ball to remember our beautiful little butterfly Lola, and to raise funds, but also to raise awareness of Meningitis because knowing the signs and symptoms may just save a life.  We have been overwhelmed by the support we have received from the people of Limerick.”

ACT for Meningitis is a national meningitis support and awareness charity based in Galway.  Set up in 2011 by Siobhan and Noel Carroll following the loss of their 4-year-old daughter Aoibhe to this devastating disease. ACT for Meningitis aims to raise awareness, promote education and provide free support to anyone in Ireland affected by meningitis.

People, who did not attend the ball, can still make a difference and offer their support to ACT for Meningitis.