Limerick city turned into a sea of rainbow colours on Saturday, July 7 for the Limerick Pride Parade 2018, the flagship event of the festival. The theme for this year is “We are Pride”, celebrating the people who have worked tirelessly behind the scenes over the years to make Pride happen for Limerick.

All of the participants gathered at Limerick City Hall to get ready to walk with pride up O’Connell Street with Richard Lynch, founder of ilovelimerick and the Grand Marshall for the Limerick Pride Parade 2018 leading the way.

“Five, four, three, two, one…Happy Limerick Pride!” engines ready, the Grand Marshall led the parade marching through O’Connell Street followed by the employees from Dell, who was one of the sponsors of the parade, young people from Limerick Youth Service along with cheering crowds, exciting slogans and waving rainbow flags.

Richard Lynch said “I cannot believe that it has been ten years. Ten years ago I was working as a volunteer in pride but now I am leading the parade. It is amazing.”

Flapping the rainbow flag, Mr. Lynch called out “Happy Limerick Pride” and “I Love Limerick” to the crowd along the way of the parade.

“September 2008 was the first year I worked with Pride and that year it became a week-long event which I called I Love Limerick as I wanted it to be integrative and give the music, arts, and culture of Limerick a platform. That Pride was the birth of ilovelimerick, which will officially be ten years old this September,” says Richard.

A 300ft national pride flag carried by marchers was unfurled down O’Connell Street. 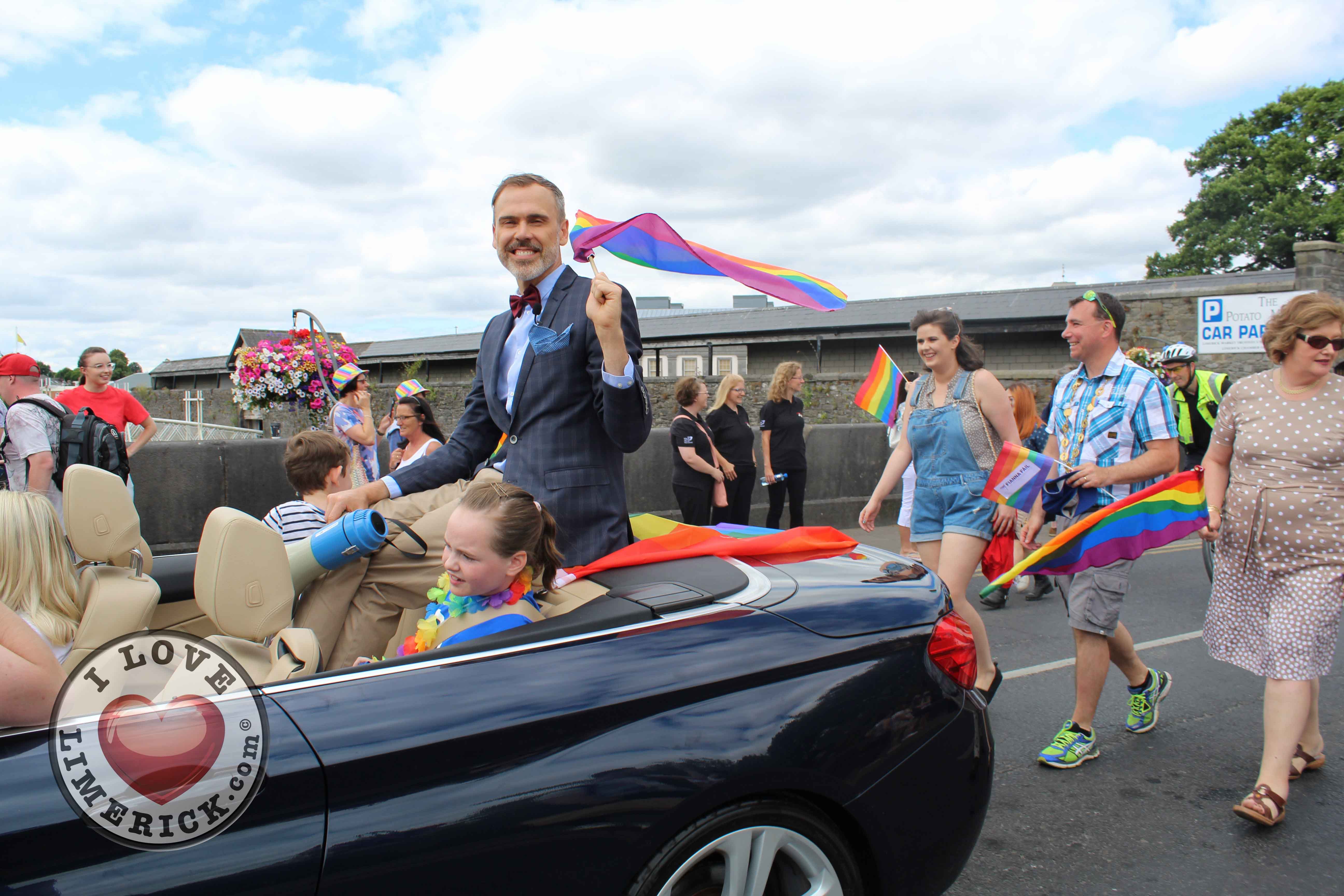 After the parade, the Pridefest party began at the garden of Hunt museum in the rhythm of cheerful music and pleasant laughter.

The Hands in Harmony Dead Community Choir played a breathtaking performance as the preheat for the Pridefest, while performances by drag queens and the annual tea dance led by Myles Breen brought the party to a festive climax.

Drag queen Ryan Hanton aka Ms. Royal Pain said that the Pridefest was “creating a moment for standing out.”

“The theme for this year is ‘We are Pride’ as we really want to represent all of our community members, especially for those who first marched down O’ Connell Street with the rainbow flag in 2008, ” said Lisa, “We wanted to make this year a celebration for everyone in Limerick. The parade is a celebration of the rich diversity of LGBTQ community in Limerick, Ireland and the world.”

Drag queen Ms. Royal Pain mentioned that “We are Pride represents the spirit of the whole movement. It’s about being proud and comfortable in who you are no matter who you are.”

Richard Lynch said that he was proud to be selected as the Grand Marshall for the pride this year.

“It’s a beautiful honour for me. Limerick is the city I love. I love Limerick Pride. The pride Parade always makes me sentimental as my mother and father, Florence and Eric, always made sure to come and watch the Parade. They were so proud of me and that motivated me to do the best work I could do.”

Talking about why we are pride, the Grand Marshall stated that more effort still needs to be taken.

“People ask why do we still have Pride since marriage equality was passed in 2015. We have a Pride because there are people in Ireland that still experience hatred because they are LGBT. Especially in the transgendered community. Some people, especially in rural areas, still cannot come out and stand proud because of their personal circumstances. We need to be role models for them, so they know they are not alone. On an international level, people in Russia and other countries are being murdered and executed because of their gender identity, because of their sexual orientation. It’s not fair, and it’s not right, and as an LGBT community, we need to stand together in solidarity,” said Richard.

LGBTQ culture is now becoming more mainstream in Ireland and further acceptance of a gender and sexuality needs to be applauded.

by richanthon in Entertainment, Events, I Love Limerick, News 0 comments 1758 0

Some the inspirational young people who form the Youth Advisory Panel on the LGBT Youth Strategy at the Limerick LGBT Pride Parade 2017. Picture: Álex Ricöller/ilovelimerick

The young people were delighted to be involved in Limerick LGBTI Pride 2017. The group were keen to focus on gender recognition. During their speech at Pride Fest following the parade, one member of the group said “In this country, if you are under 16 you can’t be legally recognised for your gender. If you are between 16 and 17 you can but you have to go through loopholes. Right now we are trying to fix that so that everybody can have legal gender recognition”.

The amazing young people spoke candidly at Pride Fest with another member saying “When we were talking to young people while doing our consultations we found out that some of the words we use all the time in our community are not words that everybody knows. When I say my pronouns are she/her that means that is how I would like to be addressed, when people use those pronouns with me that is them respecting me”.

The aim of the group is to develop a strategy which addresses the challenges and needs faced by young members of Ireland’s LGBTI community and will work with young people from all over the country to do so. The strategy will ensure that all young LGBTI young people can achieve their full potential in terms of their physical and mental well-being, being safe and protected from harm and are respected and contributing to their world.

Members of the group also spoke about their experience of being involved in the strategy and what it means to them “I am lucky I live in Dublin it’s a very friendly and open environment but other areas of Ireland are not like that and those are the people that I am trying to help. Those people who are younger than me and who will grow up after me deserve to be represented”.

The group were passionate about their work and one member spoke about the inclusion of the I for intersex in LGBTI. “I stands for intersex, an intersex person is someone who was born with ambiguous genitalia or chromosomes. That means that they are not classed with what would traditionally be a male or female body. Often these babies have surgery to make them ‘normal’ and we would like to put a stop to that with our involvement in this strategy”.

Overall, Limerick LGBTI Pride 2017 was a huge success with events running throughout the week. The main celebrations took place on Saturday with the Parade, Pride Fest at performances at Dolan’s. The parade saw hundreds of people line the streets of Limerick to celebrate Limerick LGBTI Pride 2017. This was followed by a huge Pride Fest held at the Hunt Museum which featured performances from legendary drag queen Shyanne O’Shea, Unity Gospel Choir Limerick amongst others. Saturday night saw Dolan’s filled with Pride as they hosted the Pride Climax party.

Richard Lynch, PRO Limerick LGBTI+ Pride 2017 said “People have been asking now that Marriage Equality has been passed in Ireland, why is there a need for a Pride Festival? There will always be a need as long as others in the global LGBTQ community are not as fortunate as us in terms of equal rights. We must fight for our brothers and sisters throughout the world and take a stand for human rights for all. That’s why our theme this year is Lesbian, Gay, Bisexual and Transgendered (LGBTQ) Youth. It was an event supporting LGBTQ young people in Limerick and beyond and we want Pride to be an inclusive, open and integrated event welcoming all people regardless of their sexual or gender orientation, religion or race.

For more on the LGBTI+ National Youth Strategy click here

by richanthon in Chronicle Column 0 comments 2025 0

See What’s Happening in the Latest

You can view the article by clicking on the preview.