Irelands Young Filmmaker of the Year 2019 announced its Junior winners on Wednesday, March 27 and its Senior winners on Thursday, March 28 at the Fresh Film Festival 2019 in Limerick.  The competition, which received a record of more than 1,700 entries this year, announced the winners at the Odeon Castletroy.

14-year-old Sean Treacy from Ashford in Wicklow took home the title of Ireland’s Young Senior Filmmaker of the year 2019 for his short film ‘Rue’, a story about a boy who regrets his last words to his best friend. Speaking about his win, Sean said, “To win here today is an absolute honour, especially considering the quality of the films that were entered! I think this year’s films are the highest quality that Fresh Film has ever received. They were all absolutely outstanding and any of them could have placed first. I am really honoured and chuffed that it was this film that won. It’s one the actors and I worked really hard on, I couldn’t have done it without them, and they were amazing. I can’t thank Fresh Film Festival enough for organising the whole event, it was just fantastic!”

Sean also directed the short film ‘Spark’, in which the body of a camera brings a young boy’s dream to life, which was also screened during the festival. Sean had previously come second in Ireland’s Young Filmmaker of the Year 2018 for his film ‘Brother’ in which two kids become unlikely friends after they are forced to spend time together. 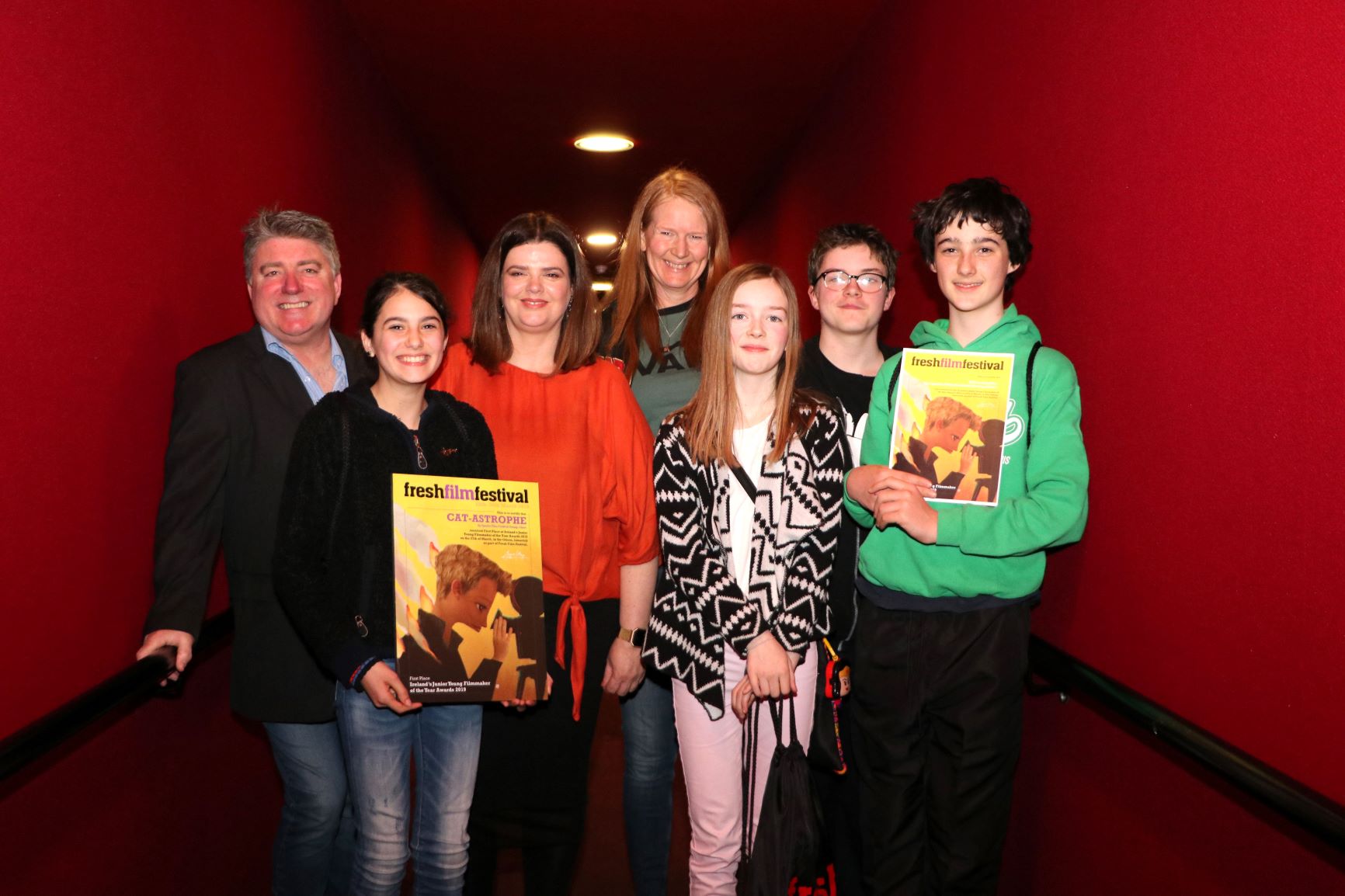 Students from Clare who were part of the Sparks Film Group took home the title of Ireland’s Young Junior Filmmaker of the year 2019 for their short film ‘CAT-astrophe’, in which a strange cat is found and weird things begin to happen. Emma Sams, the group’s mentor from the Spark’s Film Festival in Clare spoke about their win, “Well it’s brilliant! They put so much work into putting the film together. It came from a small festival held at the Scarriff public library in Scarriff, East Clare, called Spark’s Film Festival, which has been going for a few years. It’s a miniature version of Fresh Film Festival. These guys came and did some workshops during the week of the festival and put so much work and effort into putting the film together. It’s brilliant to see that they’ve been rewarded for all their hard work, thanks to Fresh Film Festival”.

At the Seniors, Cal Arnold O’Driscoll, aged 16 from Dublin was the second place winner for his film ‘Big Bad World’, in which two Irish teens from the ’90s, finally break the rules by going on their very own vacation. Milosh Hughes, aged 18 from Malahide in Dublin took home third place for his film ‘Descensus’, which is a story about a young who boy loses his grip on reality as constant nightmares cause him to spiral into madness. Waterford’s SWAY Project for Waterford city won Best Group at Ireland’s Young Filmmaker of the Year 2019 for their film ‘Big Trouble in Little John’s Park’.

At the Juniors, students of Kilcoona National School in Galway, were the second-place winners for their film ‘Some Time in the Woods’, which follows Anna and her five friends as they go into the woods for a picnic, where Anna stumbles upon an old pocket watch which leads to them travelling back in time. While Ivan Fair aged 11 from Westport, Mayo took home third place for his film ‘I Miss You’, a sad story about a boy who misses his brother that died, and how he copes with his grief.

Vigga Wagner from Copenhagen in Denmark won the International Film Award for her film Bubblehead which follows a girl who lives a solitary life with her pet fish that meets a cute boy when she visits the pet shop after her goldfish dies.

Other entries received Highly Commended Awards on the day. In addition to the Ireland’s Young Filmmaker of the Year awards, a number of specialist awards were presented for both the Juniors and the Seniors including the Radharc Trust Award (documentary), the Boulder Media Animation Award, the RTE 60 Second Short Film Award and the RTE Factual Award, in addition to the International and Audience awards.

Ireland’s Young Filmmaker of the Year is the highlight of Limerick’s Fresh Film Festival, which is now in its 23rd year. Other highlights of Fresh Film Festival 2019 include feature screenings and workshops including an Industry Master class with The National Youth Film School.

Fresh Film Festival encourages young people from Ireland and overseas, aged 7 to 18 years, to create, exhibit and share films.  The festival provides an opportunity for these young filmmakers to have their work seen on a cinema screen for the first time and to compete for the title of Ireland’s Young Filmmaker of the Year.

“Ireland’s Young Filmmaker has a very interesting approach,” says Jayne Foley, Director of Fresh Film Festival. “Storytelling is at the core,” she says, “because the budget is usually either low or non-existent, filmmakers have to be very inventive with plot and location.” Jayne adds, “The festival is a forum where young film-makers can meet each other. Even at that stage networking is important. You may end up meeting the same people again later in your career. As advocates of young filmmaking, we also try to showcase films abroad. We’ve brought Irish films and young filmmakers to Korea, Austria, Germany, and Edinburgh. This year we are excited to have a number of international young filmmakers coming to Fresh and sharing their filmmaking experience with us.”

For more information on the Fresh Film Festival, go here.

For more stories on the Fresh Film Festival, go here.