Sr Helen Culhane, Limerick Person of the Year 2017, founded the Children’s Grief Centre in 2009 and it has been providing support services for school-aged children and young people affected by loss through death, separation, and divorce in Mid-West Region. The Children’s Grief Centre sees around 300 children every week, aged 4 to 18 years. 70 per cent of the children who attend has separated parents while 30 per cent has suffered bereavement. The services provided allow children to express themselves through play, art, and offering a listening ear in a safe, and non-judgmental setting.

The campaign raised €2,500 altogether over the two days, which will be donated equally between the two charities.

Suzie O’Kelly, a counter manager in Brown Thomas, spoke about how their charity committee came up with the idea of the Gifting Bear.

Suzie said, “We devoted one of Limerick’s most famous windows for the weekend and asked the children of the Brown Thomas Limerick team to donate a teddy they no longer need. After the weekend, the teddy bears will then be handed over to the Children’s Grief Centre, to those who may be in need of a hug. On behalf of Brown Thomas’ charity committee, we are so proud to support the Children’s Grief Centre.” 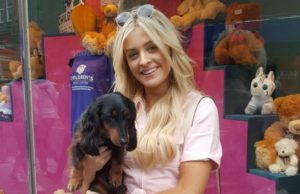 Brown Thomas’ donation of teddy bears and bucket collection is timed well, as also on that day, Friday, June 14, the Children’s Grief Centre celebrated its tenth anniversary with their ‘Children and Loss Conference 2019’ at the Millennium Theatre at the Limerick Institute of Technology.

At the conference, the centre called on the government to fully fund its services as it has seen demand triple.

Sr. Helen Culhane, Founder of the Children’s Grief Centre, speaking at the conference to mark their 10th anniversary said, “We see the work we do as very important as we are supporting children who are impacted by loss due to bereavement, separation and divorce. The centre is unique in that it is volunteer-led and to-date we have seen over 1,300 children, two-thirds of which are referrals due to loss by separation or divorce. The remaining one third is referrals due to loss by the death of a family member or close friend for the most part. The conference will help raise awareness around bereavement and loss and the resultant emotional turmoil experienced by children. We are delighted to be celebrating our tenth anniversary since the centre’s foundation but we are running at full capacity and need a new building to meet the overwhelming demand from families of bereft children. We are lobbying the Government to help it build a larger, €4 million centre to cope with the extra demand. The annual estimated cost of running the service is approximately €150,000.”