At the Mayoral Reception for @ClionasFDN we talked to the charity's founder @CEOClionasFDN about the positive response they received for their great work for families across Ireland. #ilovelimerick #lovelimerick #lovinlimerick pic.twitter.com/8BLwkn7GtW

Limerick City Hall hosted a Mayoral Reception on Tuesday for the Cliona’s Foundation in order to acknowledge their incredible work in supporting families of children with life-limiting illness, as well as present awards to Fionn O’Hehir, Alan McGrath and Jimmy Crowe for their amazing courage while caring for a very sick brother or sister.

Speaking at the reception was Mayor of the Metropolitan District of Limerick, Daniel Butler, who presented the awards to each of the three youngsters, as a way of recognizing their incredible selflessness in caring for their siblings. Also speaking at the event were the founders of Cliona’s Foundation, Brendan and Terry Ring, who thanked the Limerick County Council for the reception and their support to the charity.

Family and friends of Adam McGrath, Jimmy Crowe and Fionn O’Hehir attended the event to show their support to the three brave young boys who showed tremendous love to their sick family members and went above and beyond in supporting them despite their young age. The boys were each awarded certificates by the Mayor as a way of congratulating them on behalf of the County Council.

At the Mayoral Reception for @ClionasFDN we talked to the charity's co-founder Terry Ring about why they started this wonderful charity that helps so many families across Ireland. #ilovelimerick #lovelimerick #lovinlimerick pic.twitter.com/LjIb1QWyAV

The reception aimed to raise awareness of the incredible work being done by the Limerick charity, Cliona’s Foundation. The Foundation is the only charity in Ireland providing financial support to the families of children with a life-limiting condition all over the country from birth up to the age of 16 years of age to help with the nonmedical costs of caring for their child. These costs can include accommodation, car parking, travel, child-care, and specialist equipment.  They have supported over 530 families over the past 11 years. The incredible growth of the charity over the years has surprised even its founders. “It just goes to show the real need for this Foundation,” says Terry Ring. 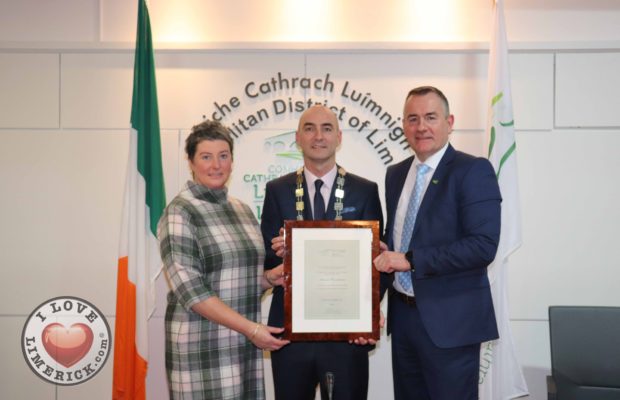 The Foundation was set up by Brendan and Terry Ring, following the death of their daughter Cliona, from an inoperable brain tumour in 2006. Brendan and Terry were shocked by the expenses needed to care for a seriously ill child and were struck by the number of families that were also facing this enormous financial hardship as they were blindsided by non-medical expenses. They set up the charity to help relieve these families of the stress of these costs. These costs can include accommodation, food, petrol and other miscellaneous expenses incurred by families who must take sick children to hospitals or other medical facilities for frequent treatments. “The financial strain to the families in these situations is what people often overlook,” says Brendan, “so it’s great for Limerick city to know the work that we do.”

Since its inception, Cliona’s Foundation has raised over €1 million and helped more than 550 families across 29 counties. It is Brendan and Terry’s intimate understanding of the stress brought upon these families that explains the diversity of expenses covered by Cliona’s Foundation – from rent, food, utility bills to transportation for chemotherapy or alternative therapies, to a treat for a sibling and even covering the cost of a child’s funeral.

For more information on the Cliona’s Foundation, click here