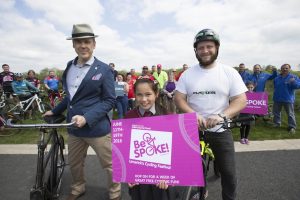 The highlight event from Limerick Smarter Travel will take place on Sunday June 12th  with registration from two o’clock with the ‘Riverside Family Cycle’ starting at the Irish Estates, passing through the Shannon Fields before turning down the Park Canal and ending at O’Brien’s Park in Clare Street. The family-friendly cycle will be immediately followed by a ‘Party in the Park’ where there will be entertainment for everyone including; 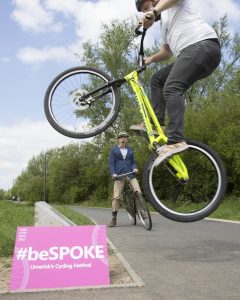 The 1916|2016 ‘Best in Show’ competition for cyclists and bicycles from 1916 or 2016, hosted by Richard Lynch, RichardKnows& ILoveLimerick.com

“The event will include three competitive classes, Expert, Intermediate and Beginner, there will be a Novis class for anyone wishing to give cycle trials a go for the very first time on the day,” he said. “The event is being supported by Cycling Ireland, The Hub Bike Shop, National Bike Week, Limerick City and County Council as well as Limerick Smarter Travel. Trophies and prizes for winners will be sponsored by The Hub. We will also be having a ‘cycle trials taster session’ at ‘The Hub’ bike shop on June 5th part of The Hub’s Sean Kelly Charity Cycle and Family BBQ, do come along to get some one-to-one trials advice, to have a practice trial, or to pre-register for the trials competition on the 12th June,” he added.

Speaking following today’s announcement, Richard Lynch, said: “Between the 11th and 19th of June there are a wide variety of BeSPOKE events taking place across Limerick, a celebration and promotion of all that’s great about bikes and cycling, there really is something for everyone. Find out whats happening near you and your family. The ‘Riverside Family Cycle’ and ‘Party in the Park’ will form part of the State Centenary Programme to remember 1916, reflect on the republic 100 years on and reimagine our shared future. The cycle and party will have a 1916|2016 theme and include a ‘Best in Show’ competition, with judges and prizes for those entering their outfits/bicycles in the 1916 or 2016 categories. Do dress up, take part and have fun with friends and family! ” he added.

Donal Brennan, Senior Engineer, Limerick City and County Council commented: We hope to see as many people as possible out and about on their bikes enjoyed the fun-filled week of events during Limerick’s Cycling Festival. The BeSPOKE 2016 events form a very important time in our annual calendar, working with the Limerick community to creatively highlight the positives of cycling not just for recreation but as an integral part of each persons daily travel routine.”