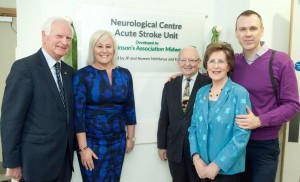 A new era in the care of Parkinson’s patients at University Hospital Limerick has been marked with a ceremony this Friday at the newly opened Leben Building Neurological Centre/Acute Stroke Unit.

A plaque has been unveiled in recognition of the contribution of the Parkinsons Association of Ireland MidWest Branch in developing the unit and the generosity of JP and Noreen McManus and family.

The new unit opened in November 2015 and includes 24 inpatient beds, nine of which are dedicated to neurology, including Parkinson’s, patients. It was completed at a capital cost of approximately €3 million, with additional equipment costs being met jointly by the Parkinson’s Association and the HSE/UL Hospitals Group.

The unveiling ceremony took place during Parkinson’s Awareness Week and coincided with the launch at UHL of “Meds on Time”, a Parkinson’s Association campaign to ensure the timely administration of medication to patients in order to control their symptoms.

Parkinson’s is the second most common neurodegenerative condition after Alzheimer’s with an incidence of one to two per 1,000 in the general population and one per 100 in the over-80s. It is accordingly estimated that there are approximately 680 people living with Parkinson’s disease in the Mid-West (Clare, Limerick and north Tipperary).

Speaking at the unveiling today, Una Anderson Ryan, Chairman of Special Projects, Parkinson’s Association of Ireland, said the new unit would greatly benefit the region’s growing Parkinson’s population. It was a far cry from the old ward 3B where Parkinson’s patients were treated in an environment unfit for purpose.

“The Mid-West Branch of the Parkinson’s Association of Ireland have spent most of the past decade seeking to have a modern state-of-the-art facility in the region for people with Parkinson’s Disease. Thankfully, and at long last, our desire has been achieved and is evident for all to see at University Hospital Limerick. It has been a long and arduous task from design stage; involving architects and engineers, to financial and legal considerations, the tendering process and consequent monitoring at all stages of development,” Ms Anderson Ryan said.

“We believe that this new Neurological Centre will be a tremendous asset to the people of the Mid-West and the fact that it has been built at no cost to the state is hugely significant. The Parkinson’s Association here in the Mid-West is particularly indebted to JP and Noreen McManus and their family and we thank them for their munificence. The impact of the McManus family on the Mid-West Region is truly awesome and words do not exist to thank them fully and adequately,” she added.

That generosity has benefitted not only Parkinson’s but other neurology and stroke patients in the new unit.

Prof Declan Lyons, Consultant in Geriatric Medicine and Clinical Director, Medicine Directorate, UL Hospitals Group, commented:  “Stroke is becoming more and more prevalent in Ireland as the population ages and is becoming a bigger and bigger part of what an acute hospital like UHL does. The technology, the drug treatment and the management of acute stroke patients has changed dramatically in recent years and that will continue to be the case.” 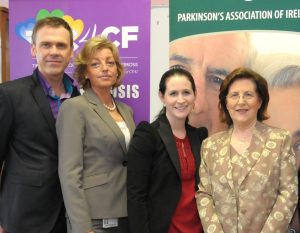 “That makes it all the more important to have the right facilities to deliver optimal care to stroke patients and that is what this new unit will help us to achieve. We are deeply grateful to the Parkinson’s Association of Ireland, to the McManus family and to all of our own staff who have contributed to delivering this marvellous new unit for our stroke and neurology patients,” Prof Lyons said.

The contribution of the HSE and Department of Health in meeting much of the equipment costs in the stroke unit and in the wider Leben project was also acknowledged. The HSE has in addition met the costs of additional nursing, medical and allied health posts in the new unit, including in speech and language therapy, occupational therapy, physiotherapy and neuropsychology.

The Parkinson’s Association of Ireland has also contributed to specialist staff training and awareness campaigns around Parkinson’s and the unveiling marked the commencement at UHL of the “Meds on Time” campaign.

Staff nurse Michael O’Halloran is one of seven nursing, physiotherapy and pharmacy staff who, supported by the Parkinson’s Association and UL Hospitals Group, volunteered for a Parkinson’s Disease Nurse Specialist course at London’s South Bank University two years ago. That knowledge is now being applied for the benefit of Parkinson’s patients in the new unit.

“A working group focusing on the care of Parkinson’s Disease patients is now fully functioning and its aim is to provide up-to-date, evidenced-based, efficient, optimal care to Parkinson’s patients admitted to the ward,” said Mr O’Halloran.

“Parkinson’s Disease is a progressive, fluctuating neurological disorder. It occurs when the cells in the part of the brain that control movement are lost. These cells produce dopamine, a chemical that enables people to perform smooth co-ordinated movements. Without enough dopamine in the brain, everyday activities including walking, swallowing and even smiling are affected,” explained Mr O’Halloran.

“The main treatment for Parkinson’s Disease is medication and there are specific drugs which work by replacing or mimicking the actions of dopamine. Often people will be on a number of drugs, each of which must be taken throughout the day at specific times. These stimulate a carefully timed release of chemicals into the brain to allow a person with Parkinson’s to control their movements. The symptoms and progression of Parkinson’s Disease is unique to each individual. It may have taken a long time for the patient and specialist to establish the best individualised drug regime. Once a medication regime is disrupted, it may take hours, days or even weeks for a person’s Parkinson’s to stabilise .This can have serious consequences for ward management and the treatment for which the person was originally admitted. The patient is likely to require a higher level of care and an extended hospital stay – at a significant cost in both time and resources. There is an increased risk of accidents and falls, and in some cases the originally planned treatment may no longer be possible.  The patient may also feel a loss of dignity and independence as well as the ability to communicate and exercise choice in their care,” Mr O’Halloran explained.

Dr Peter Boers, consultant neurologist, UL Hospitals Group, said: “It is a very well recognised phenomenon with Parkinson’s patients that their symptoms are time-dependent and that they have to take their medication at the correct time. When any patient comes in to hospital, there is a standard hospital prescription chart which has the times pre-specified – be it 8am, midday, 4pm and so on – but that might not suit the Parkinson’s patients. They might need their medication at 7.30am, 11.30am and so on and there is no provision for that on the pre-printed charts. What has to happen is there has to be an understanding among medical and nursing staff at ward level that the Parkinson’s patients medication has to be given at the time they take them at home. The particular time is very important.”