Former WBO World Middleweight Champion and one of Limerick’s great all time sports people, Andy Lee, returned to St Francis Boxing Club for the official handing over of keys to Limerick City and County Council of a property adjacent to the club.

The property acquired by the club will provide what was described as a much-needed extension that will allow the club to expand from what is currently a 40-member capacity to over 70 members.

Former Middleweight Champion Andy Lee spoke of what it means to see the club where he honed his skill receive the expansion, describing the difference it can make by putting “People on a path in life.”

He added, ”You have to invest in young people, give them a purpose. You get a life-long return from it. The St Francis Club has turned out and still is turning out national champions.“Who knows, maybe we already have an up and coming world champion in our midst in the club and that’s something we all dream about.” 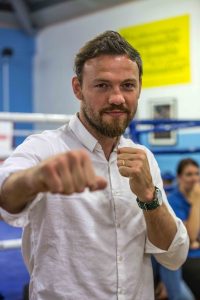 “Who knows, maybe we already have an up and coming world champion in our midst in the club and that’s something we all dream about.”

The adjacent property, which will help double the club’s capacity, was recently purchased by the Department of Environment, Heritage and Local Government through Limerick City and County Council. St Francis’ is the longest running boxing club in Ireland and in the past decade has produced over 20 All-Ireland Champions as well a WBO World Middleweight Champion in Andy Lee.

St Francis Boxing Club President Noel Griffin, who has over 60 years experience in boxing said, “Today is a dream day for us. We have been constrained in terms of capacity for so long that I expect we will double the members in the club within weeks of the new extension opening.”

At the ceremony, speeches echoed the importance of this expansion for the club and the community, focusing on the impact clubs like St Francis’ have on the youth in the city.

Speaking to ilovelimerick.com Ken Moore of St Francis Boxing club said, “We will develop to a membership of 70 people, 30 extra boys and girls will have somewhere to go every night. It will get them off the streets, away from their video game consoles. They will be here learning a skill and great sport.”

You can read more stories about Andy Lee here.
Here you can find more sports stories.