Bressie talk on Mental Health at the Castletroy Park Hotel

On Thursday, September 29, Niall Breslin aka Bressie, a role model and advocate for mental health in Ireland gave a talk on mental health and well being at the Castletroy Park Hotel. The Bressie talk at Casteltroy Park Hotel was a huge success with a full house of around 400 people listening to his keynote speech.

Bressie is an Irish musician and former Westmeath Gaelic footballer and Leinster Rugby player. Breslin found success as the lead singer, guitarist and songwriter with pop band The Blizzards, as a co-writer and producer with XIX Entertainment and as a solo artist. He was the winning coach on the first and third seasons of The Voice of Ireland.

Before the Bressie talk at Castletroy Park Hotel, Bressie spoke with I Love Limerick correspondent Holly Kenny about mental health and well-being on a variety of topics such as, the evolution of Mental Health in Ireland, the connection between physical and mental health, how music and creativity help when battling anxiety and depression and the next step for the progression of mental health services in Ireland. 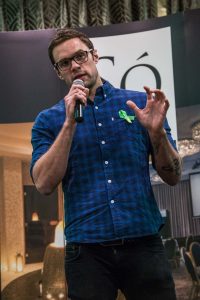 When asked about his own role models for mental health in the 90’s, Bressie spoke about how mental health was misunderstood, “Things I remember quite acutely, one of our heroes growing up would have been Kurt Kobain and when he took his own life all of us in school were asking the teachers ‘what happened?’. I mean, we didn’t understand what suicide was.”

The conversation turned to the importance of embracing the talents and passions of an individual. Bressie spoke about his own musical history with his band ‘The Blizzards’, “When I play an instrument, I’m not thinking about anything else. Whether it’s piano, guitar or I’m writing music, you go into the present which is the holy grail for anybody. If you can be present, you can actually embrace the moment and not worry about the past or the future – and that’s a cliché thing to hear but until you do things that you love or are passionate about, that’s when you will truly understand.”

Following the interview, the I Love Limerick team sat to listen to the speakers for the evening. The first speaker, Jen Ronan from See Change Ireland,  gave a humorous speech about her past and complications she endured when dealing with her mental health issues over the years. Considering it was her first time doing public speaking, Jen stole the hearts of the crowd with her endearing, quirky personality.

After Jen’s speech, Bressie came up on the stage to talk about the spectrum of Mental Health while also touching on some political issues regarding the need for more governmental mental health resources. 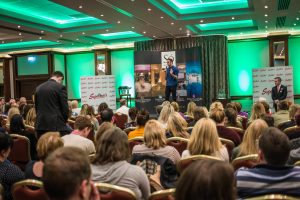 Bressie spoke about growing up with anxiety and the difficulties of getting support and the pressure of presenting yourself in a positive light even though you’re going through hell on the inside. He also spoke about the importance of being good to your body and how that can reflect on your mental health. After changing his diet, eating healthier and staying away from alcohol his anxiety improved. He also spoke about the importance of facing your fear when trying to overcome anxiety by telling a story about his fear of swimming, and how he confronted it by learning how to swim and signing up for an open water swimming competition.

He said that schools needing to embrace young people’s talents instead of pushing them to do courses that they don’t want to do.

Lastly, Bressie gave five simple tips for the audience to practice at home for 10 days.

First, stay away from toxic people and environments.

Third, say 30 thank you’s from when you wake up and be grateful for life.

Fourth, have 30 mindful moments a day, pay attention to the little things in life, the comfort of a cup of tea or how snug you feel in a blanket.

Last but not least, stop judging people, because you have no idea what that people could be really going through.

For more news on Mental Health in Limerick from I Love Limerick click here.

Limerick CDKL5 Charity Walk 2016 is a success Paul O Connell book ‘The Battle’ is set to be a huge hit!