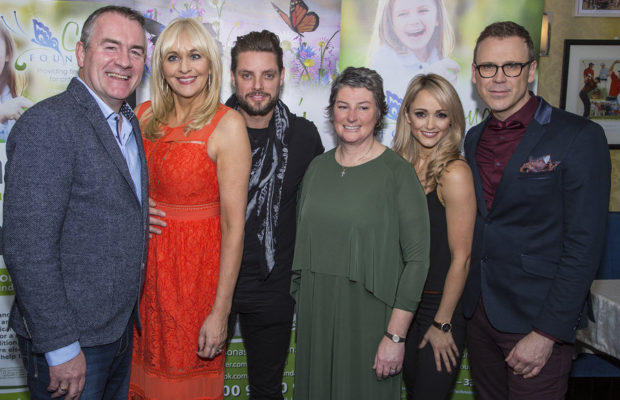 Richard pictured in 2011 at the making the I Love Limerick documentary about Cliona’s Foundation with Clionas parents Terry and Brendan Ring and interviewer Sami Long.

One of the main charities that I have been supporting for over 6 years is Cliona’s Foundation and it is a cause very close to my heart. Some of my proudest moments have happened in my work with this charity and it’s an amazing feeling to see all the hard work come to fruition and actually have results!

Cliona’s Foundation is a charitable organisation that was founded in 2007 by Terry and Brendan Ring following the death of their daughter Cliona, who died from an inoperable brain tumour. Its aim is to provide financial assistance to families from Ireland who has children undergoing long-term medical treatment for critical illness for non-medical expenses. I first met Brendan and Terry over 6 years ago when I Love Limerick visited them at their home to do an interview. Limerick lady Sami Long who was Miss United Nation Europe 2010 at the time came, did the interview with Brendan and Terry. From the moment I met them and heard their story I was so deeply moved and knew I had to help. Everything I do in aid of the charity is in Cliona’s memory and it is a huge honour for me to be involved in her legacy.

Funds raised are not to be used to pay for the child’s actual medical care; rather, donations are made to families for other ‘hidden’ costs, including hotels, restaurants, petrol and other miscellaneous expenses gained by having to travel to hospitals to receive treatment. Terry and Brendan’s beautiful daughter Cliona who passed away in 2007.

There are currently over one hundred children’s charities operating in Ireland but Cliona’s Foundation is unique in that it focuses completely on non-medical assistance for families who have exhausted all other avenues of assistance. No other national charity in Ireland offers financial support for non-medical costs associated with the illness.

The goal of Cliona’s Foundation is to help families in remaining intact and functional during their crisis and to ensure that the family, friends and neighbours affected by critical or terminal childhood illness are helped and supported and no needs are left unmet for as long as needed. To date the charity has supported almost 400 families in 28 Counties across the country, raising over One Million Euro!

The Cliona’s Foundation 10th Annual Celebratory Night was held at Bulgaden Castle, Co. Limerick. It was a fantastic night of fun, food and entertainment with a host of great guests and super prizes on offer. The charity has supported 382 families in 28 counties across the country and wanted to Remember, Acknowledge and Celebrate, those that have helped them over the past 9 years. Many of the previous events special guests returned for this night with Keith Duffy, Miriam O Callaghan, Leanne Moore, Sami Long, Richard Mulcahy and John “The Bull” Hayes all in attendance. It was a very special night and one that will go down in history for the charity. Congrats to all involved.

To find out more about Cliona’s Foundation, click here.

To read about other charity events in Limerick, click here.