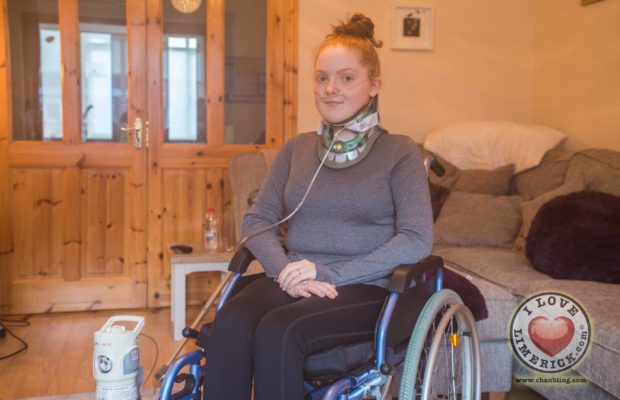 MOST RECENT UPDATE: Ciara Micks and her Mum Anne are finally able to return home to Limerick after 6 weeks in Barcelona for her life-saving Neurosurgery. Ciara was operated at her skull, neck, ribs and lumbar spine. They won’t know how successful the operation has been for at least another few months, but early signs are positive. She still has a long road of recovery ahead of her, up to a year and won’t be able to lift anything larger than 2kg for 3 months. “We are delighted to be finally coming home. We had a fantastic surgical team in Barcelona who looked after Ciara with great care. But you need your family and friends around you for additional support”, said Anne. 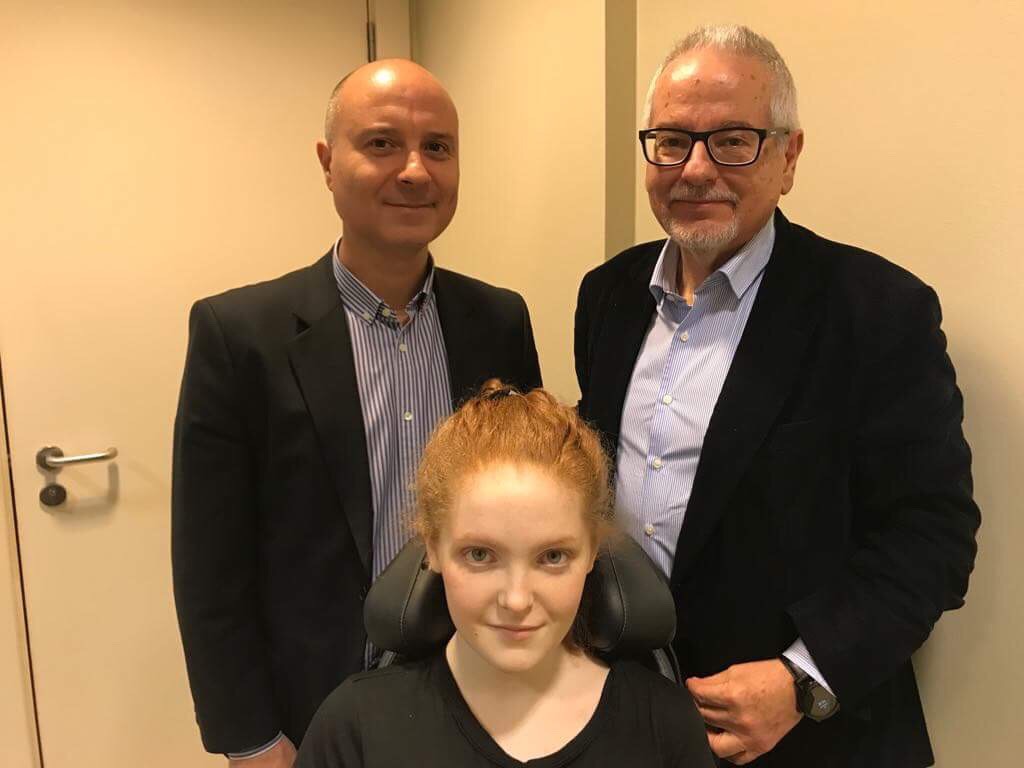 Ciara with her doctors in Barcelona, Dr. Gilete and Dr. Oliver when they were saying goodbye.

UPDATE: Ciara’s surgery is now booked for Thursday, March 8. Ciara and her mother, Anne will travel to Barcelona in two weeks and the hospital must be paid a week prior to Ciara’s surgery. The intention had been for Ciara to attend as an outpatient for pre-op tests which is normal procedure. However, due to her complex history and bleeding disorder, the surgical team have decided that Ciara should be admitted to hospital as soon she arrives in Spain. Unfortunately, this will also increase costs. Ciara and Anne are incredibly grateful for the response they have received as every euro counts and are confident that they will get there with the support of their community.

Fundraising efforts for Ciara’s surgery continue to go ahead. Tesco in Roxboro has dedicated one of their community pots to Ciara.  There are also collection points at Widdess Pharmacy, Bella Italia, Irwin Jewellers, La Cucina and Snack Shack in Ennis. If you would like to donate to Ciara’s EDS surgery fund, you can visit www.gofundme.com/ciaraeds.

Sixteen-year-old Ciara Micks hopes to raise more than €100,000 for a surgery in Barcelona that could save her life.

Rheumatologist Brian Mulcahy in Cork diagnosed Ciara with Ehlers Danlos Syndrome (EDS) in 2015, but since being diagnosed her condition has deteriorated dramatically. Due to a lack of expertise in Ireland, Ciara and her mother Anne were forced to travel to London, as are most EDS patients.

EDS is a condition affecting the connective tissues in the body, which provide support in the skin, tendons, ligaments, blood vessels, internal organs, and bones.

Although more than 600 people nationally, with approximately 40 in Limerick, have been diagnosed with EDS, it is still under-researched in the country, and both Anne and Ciara believe many people go undiagnosed because of the lack of knowledge. 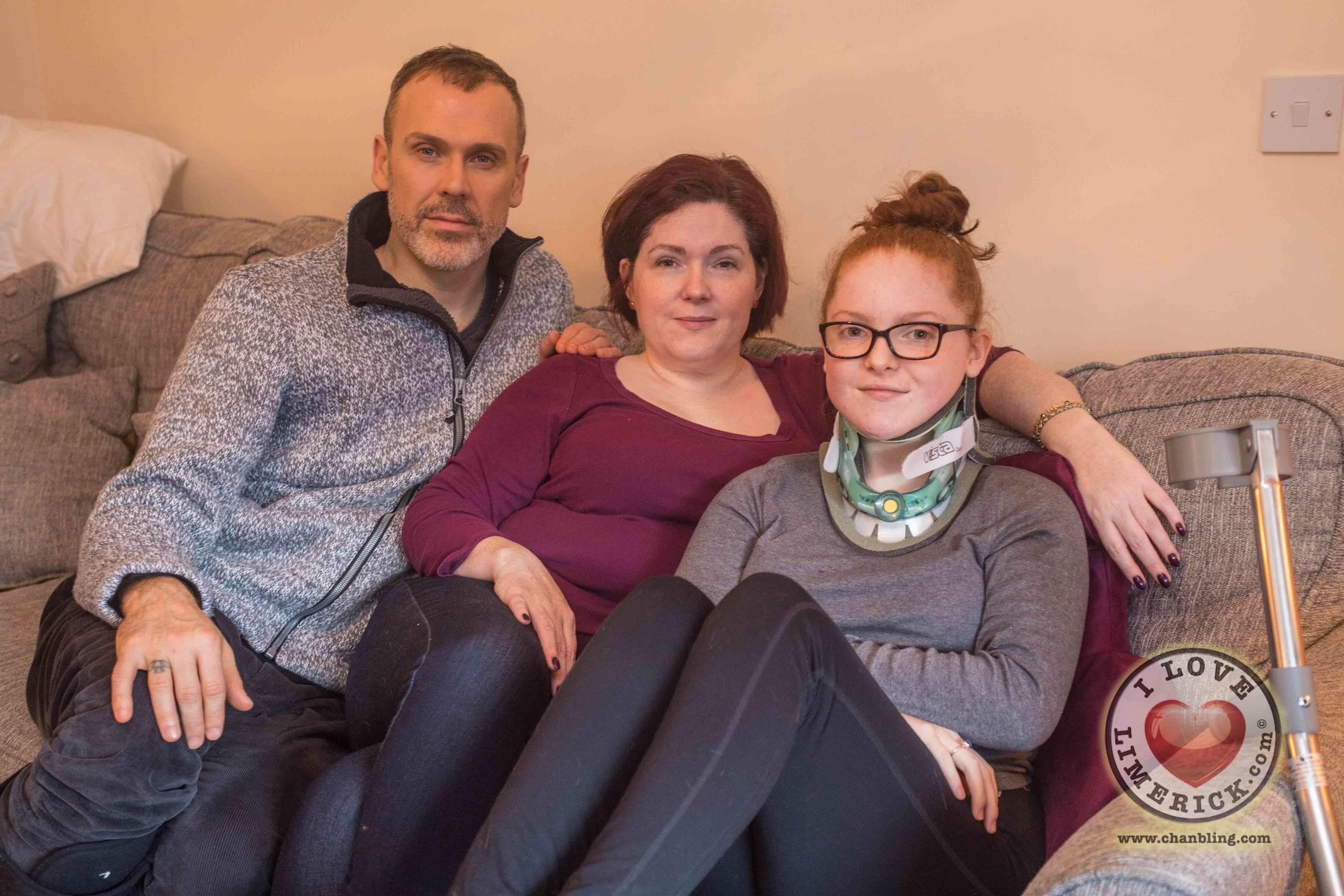 Anne Micks is also the Chairperson of Irish EDS and Hypermobility Spectrum Disorders (HSD) in Ireland and says, “we have more than 500 adults and more than 120 kids in the Irish EDS and HSD group, and that is only our group. In 2014 it was estimated there were nearly 2000 people in Ireland who have the condition.”

When Ciara found out she had to travel to Barcelona for the surgery she said, “I just thought it was ridiculous. There is no reason apart from the lack of knowledge why we need to go there.

“It’s a choice to learn about it, and with so many people with EDS in Ireland it isn’t comprehensible that people who can help don’t have an interest in it.”

As there is no treatment available to EDS patients in Ireland, many people like Ciara are forced to travel to the UK for checkups, as well as specialist advice and treatment.

Raising funds for a life-saving surgical procedure, Ciara hopes to make the trip to Barcelona, Spain which is the only European city to carry our the cervical fusion surgery Ciara needs. This operation would need to happen this March 2018 so she needs to raise the funds before then.

“In Ireland, they can do cervical fusion procedures, but not on an EDS patient, never mind somebody with as many complications as I have – blood pressure problems, heart problems, and my blood does not clot.

“You have to take into consideration the EDS and being resistant to the anesthesia, so they have to do a lot to make it work.”

After the surgery, aged just 16, Ciara will never be able to move her neck again, or move her head up, down, left or right.

Ciara said, “When I found out about the surgery I thought I’d be more scared than I was. But I sort of knew that it was coming, it’s hard to explain it, but it was happening in my own body, so I felt it was coming. My mum broke down, and I just said, okay let’s do this. I was ready to make a change for the better.”

Time is of the essence for Ciara now as the next available procedure is in March, leaving her with just over one month to raise more than €70,000 by the time of writing this article.

“We have a lot of people helping so far, so it’s very enlightening to see so many people actually care and try to help. There are people in Glasgow and Lanzarote helping us raise funds,” said Ciara, with her mum adding, “We are very fortunate.”

If Ciara misses the surgery in March, Anne says, “Ciara can’t be in Spain when we go into the hot weather when she is recuperating as one her comorbidities is she can’t cope with extreme heat, she passes out.”

If the surgery is moved back to November, Anne says, “that takes away another year of her life. And she has had enough years gone already.”

“If anybody would like to help raise funds by doing their own event in Ciara’s honour, please get in contact as we would be very grateful,” Anne concluded.

If you would like to donate to Ciara’s EDS surgery fund, you can visit www.gofundme.com/ciaraeds or contact Anne at [email protected]

For more stories on fundraising in Limerick click here