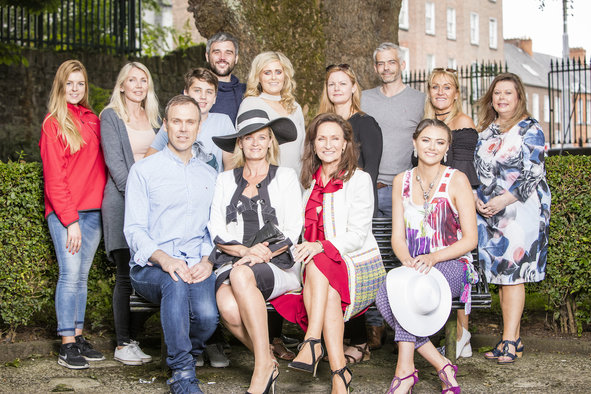 Celia volunteered her time to style a fashion photo shoot to promote Focus Ireland Beloved charity shops. Celia pictured here with Richard Lynch and the crew from I Love Limerick, the team from Focus Ireland and models from the Holman Lee Agency. Picture: Michael O’Sullivan/OSM Photo.

Recently Celia volunteered her time to style a fashion photo shoot to promote the Focus Ireland Beloved charity shops. The shoot was produced with the help of Richard Lynch and his crew from I Love Limerick and took place at the Georgian House building and the Peoples Park in Limerick city. Luke Culhane, Limericks current Limerick Person of the Year and Aisling O’Connor filmed the day’s events. Limerick ladies Lousie Griffin and Mary Joyce donated their time to do the makeup and the hair and Michael O’Sullivan from Cork who regularly works with Focus Ireland was the photographer for the shoot. Models were provided by the Holman Lee Agency.

These quaint little shops have four locations in Ireland and are the talk of the town. The quirky boutiques specialise in quality fashion and gifts for women and children.

Beloved stocks new and gently worn clothing donated by designers, retailers, and private donors. You’ll even find many clothes with the labels still on. Examples of stock include items from designers Fendi and Dolce & Gabbana as well as high street shops Karen Millen, Zara, Cos, and Oasis. The stores also stock homeware, gifts, calendars and iPhone covers.

All the money raised through the stores goes directly towards Focus Ireland’s fight against homelessness. Focus Ireland Ambassador Celia Holman Lee said, “I am so honoured to become an ambassador for Focus Ireland as thanks to them there is a clear end in sight for the trauma of homelessness that Irish families are currently going through each day.

The impact, which Focus Ireland has made on the people of Limerick, was borne out by a recent study, which outlined the difference a youth housing project made in the city.

Shockingly 1 in 3 now experiencing homelessness is a child and the situation is getting worse all the time. There are now over 2500 children living in emergency accommodation in Ireland. Homelessness is a frightening and shocking experience for anyone, and for a child, even a short period of being out of home can have a long-term and far-reaching impact on their life.

Focus Ireland’s Limerick Manager Ger Spillane has witnessed first-hand the impact of the soaring cost of rent coupled with a shortage of supply, locally.

Mr. Spillane said: “Focus Ireland knows through our work that seeking advice and information as early as possible can really help to prevent people from losing their home.

To have someone as committed and high-profile as Celia Holman Lee supporting our efforts means a lot in terms of raising awareness of the issues, and helping us to fund our services.”

Mr. Spillane said: “Our frontline staff here are still dealing with people who have become homeless from the rental sector as rents have been hiked up and they can’t afford them.

There needs to a much wider range of Government actions taken to keep protect tenants and keep them in their homes.”

Focus Ireland said it aims to play its own key role in overcoming the crisis – for people who are homeless or at risk as the charity aims to double its housing stock over the next four years. The charity currently provides homes for over 600 households around the country who were previously homeless or at risk.

To find out more about Focus Ireland click here