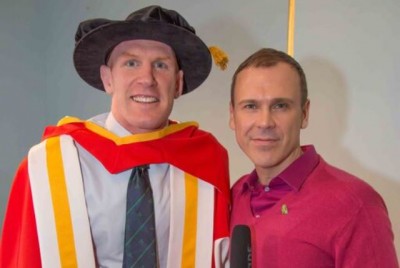 Limerick rugby legend Paul O Connell was awarded an Honorary Doctor of Science at a ceremony in front of 1,000 invited guests on Thursday November 5, 2015.

The former Ireland captain, who bowed out of international rugby after picking up a hamstring injury at the World Cup last month, is the 100th person to receive an honorary doctorate at the University of Limerick.

Irish head coach Joe Schmidt, Munster players past and present, his family and friends, including wife Emily, son Paddy and daughter Lola were at this special event celebrating.

“I am delighted, I am a bit overwhelmed by it. I had a look through the list of previous conferees – it is great company that I will be keeping. I had a lovely phone call from Declan Kidney this morning – I was at his conferring previously,” said Paul.

O’Connell, who won 108 Irish caps over a glorious Irish career, said that the University, where he completed three of four years of a computer engineering degree before professional rugby came calling in 2001, had played a “big part” in his life.

“When you grow up in Limerick, the University ends up being a big part of your life, even if you don’t go here as a student,” he said.

“To get appreciated by your home university is something that is very special. I have played in teams all my life, great Munster and Irish teams and to be getting individual honours sometimes when you play a team sport is a bit strange and it can be a bit embarrassing because you are never in that situation, it is never about the individual when you are part of a team.

For 15 years the Munster icon has trained almost daily on campus in UL, and has a long association with the campus that dates back his days as a swimmer in the original PESS swimming pool as a four or five year old, he explained.

Asked about a break with that routine now with his move to Toulon in the offing – albeit with months of rehab for his injury ahead of him – he said simply: “It is part of life, part of the circle of life.

“I think the Toulon move is something I gave a lot of thought to and I swayed back and forth as to whether it was the right thing or the wrong thing to do. But I think for whatever I want to do for the rest of my life, I think I will be all the better for having this experience and it is something I am really looking forward to,” he said.

O’Connell explained why he wouldn’t rule out a return to education in the future: “I have had good excuses with having two kids and having a senior role in the Irish team and Munster team as well. I have toyed with it, I have come in and spoken to the University plenty of times about the possibility of coming back and doing various things and I cooled on the idea as well. But I probably have 18 months left playing rugby and I will be taking a little bit of time out after that and who knows, I could end up back here as a student as well,” he admitted.

UL President Professor Don Barry paid tribute to the rugby legend, who has been a director of the UL Foundation since 2011, saying that the occasion was an “opportunity to honour those who have inspired, who have led with courage and passion and who have made great contributions in their fields of endeavour.

“Much thought, consideration and deliberation goes into deciding who is worthy – except when it is a real-life super hero, and particularly when his name is Paul O’Connell.

“Today I am very proud that UL bestowed upon Paul our highest honour. He was already an important member of the UL family, but today he accepted a place in the history of this institution,” he added.