They queued for four hours in advance to meet the man who is without a doubt a true Limerick legend.

Coinciding with the release of his much-anticipated autobiography, Paul O’Connell signed copies of his book, The Battle, in O’Mahony’s Bookshop .

Over 500 people queued for hours to meet former rugby legend Paul O’Connell at his book signing in Limerick city this past Sunday, eager to get a signed copy of his book The Battle.

The book signing was due to begin at 2pm, however after The Battle author observed images of the lengthy queues on I Love Limerick’s social media, he arrived early so as not to disappoint fans on his home ground in the Treaty City. 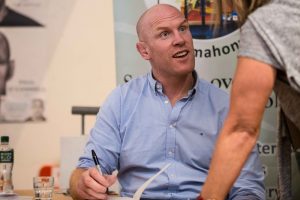 Even before he was due to meet his legions of fans, he had planned to sign more than 200 copies of The Battle, which were pre-ordered by customers who couldn’t attend the signing.

The Battle was co-written with Alan English, former editor of the Limerick Leader and current editorial director of Iconic Newspapers, which own the Leader. He also attended the signing along with many family members.

I had the honour of interviewing Paul at the book signing. With typical modesty, when asked how he felt about the phenomenal turnout, he joked that the book might be an easy Christmas present for people, as many queued to purchase several books for friends and family members.

The former Munster, Ireland and Lion’s captain described The Battle as “the full story. I think it’s very honest and I hope people will enjoy it,” he said.

I asked him what exactly was ‘The Battle’ he faced, he revealed, “the battle was mainly with myself, the injuries, playing high-pressure games, trying to win things, trying to be successful,” and told me, “blaming myself when we lost a game made me better.”

I asked him how it felt to be so loved by the people of Limerick, “I am very proud of my Limerick roots. I love living here, the sense of humour the people have, what a great place to live.”

I admire Paul so much, not just for his sporting achievements, but for his soul. Paul is a man who is truly proud of our beautiful city as he has said himself on numerous occasions and proved undoubtedly over the years through his involvement with positive campaigns and charity work. Congrats Paul. All of Limerick are rooting for you!