The Limerick CDKL5 Charity Walk 2016 took place Saturday, September 24. The aim of the walk was to raise awareness of this rare neurological condition as well as raise some funds towards research for a cure. 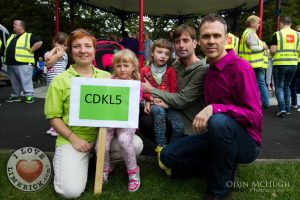 Maia Malone, a 9-year-old girl from county Limerick suffers from this rare neurological disorder. As a result of the condition Maia has severe daily seizures, which are not tamed by medication, she also suffers from gastrointestinal problems, visual difficulties, sleep disturbances, apraxia, bruxism, and she cannot talk or look after herself. Maia needs around the clock care by her family and those around there.

All members of the public were welcome to take part in the Limerick CDKL5 Charity Walk 2016 which started at 1pm on Saturday September 24. The group gathered in Limerick’s People’s Park at the tree planted at last year’s event before walking to Arthur’s Quay and returning to the park. Participants were provided with a wish ribbon that they can place on the tree at the beginning of the event.

Speaking at the event Maia’s Mum, Jonna said: “By raising awareness we are hoping that when people know more about CDKL5 and more doctors hear more about it, other children will get to be diagnosed sooner than Maia, Maia was four years of age before she got the diagnosis. The diagnosis has helped us to understand Maia’s condition a bit better.” 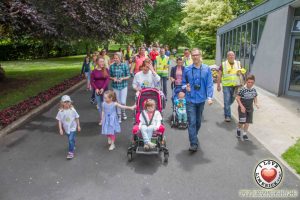 “We are raising a little bit of funds today but that is not the main point of today, today is about awareness raising but the funds that are raised will go towards research for the condition. In Europe, they are doing very positive research about protein replacement therapy that maybe will be a cure for the condition, at the moment there isn’t one; but in time. Any money raised today will go towards funding the research.”

“When more people know about the condition it might be easier to have the diagnosis received quicker for other children. In this world, you have to shout for help if your child has a disability. By having the awareness that this is what our lives are like, it makes it a little easier.”

Another mother from Limerick named Graznya Musial whose four-year-old daughter Malgosia also suffers from the condition attended the event and said, “My daughter needs 24-hour care and it’s really reassuring that there are other families in similar situations to us.”

Both mothers have daughters with CDKL5 and met through the Irish CDKL5 Facebook page and met for the first time in person on the day of this year’s walk.

Also in aid of CDKL5 is ‘The Ultimate Firewalk’ that takes place in Bray, Co. Wicklow on September 30, just one week after the annual CDKL5 walk in Limerick.

CDKL5 is a rare X-linked genetic disorder that results in early onset, difficult to control seizures, and severe neuro-developmental impairment. CDKL5 is classed as rare disease however, more and more children and indeed adults are being diagnosed every day.

The CDKL5 gene provides instructions for making a protein that is essential for normal brain development. Although little is known about the protein’s function, it may play a role in regulating the activity of other genes, including the MECP2 gene (or Rett Syndrome). The CDKL5 protein acts as a kinase, which is an enzyme that changes the activity of other proteins by adding oxygen and phosphate atoms (a phosphate group) at specific positions. Researchers have not yet determined which proteins are targeted by the CDKL5 protein.

Most children affected by CDKL5 suffer from seizures that begin in the first few months of life. Most cannot walk, talk or feed themselves, and many are confined to wheelchairs, dependent on others for everything. Many also suffer with scoliosis, visual impairment, sensory issues and various gastrointestinal difficulties. As time has gone on it appears that there might be other symptoms that play a role in the condition.

Ten years ago, Professor John Christodoulou led an Australian research team that studied the DNA of three children from the same family and found a common genetic abnormality occurring on a gene that would later become known as CDKL5. His research was published in the prestigious journal, The American Journal of Human Genetics 2004. Glyn was one of the three children at the focus of Dr. Christodoulou’s study.

Glyn’s Legacy was in his DNA, which helped scientists to begin to identify what we now refer to as a CDKL5 Disorder. Unfortunately, Glyn passed on June 17, 1997, before his disease-causing gene was discovered, but his tragic, short life had an important impact on the children who have since been diagnosed with the same devastating disorder.

You can find more information on CDKL5 here.
Check out the CDKL5 Facebook here.
Read more about our previous coverage of Limerick CDKL5 Charity Walk here.